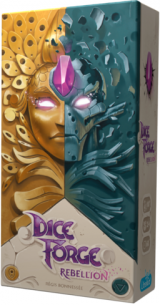 Dice, Islands, Temple. Everything was ready to begin the next grand tournament. But the gods did not count on their opponents. Ready to sedition, the goddess and the titans want to change all of the rules.

Dice Forge: Rebellion, the first expansion for Dice Forge, adds two different modules that can be added to the game: thirty exploit cards as well as new die faces, new boards, and an expansion to the sanctuary box are added to offer players new challenges, greater interaction, and more replayability.

In Dice Forge: Rebellion, find more interaction and combination. Heroes cofront new ordeals with the unexpected attendance of the goddess or the titans. Each of these two optional events provides a module (board, cards, faces and pawns) wiht a recommended setup of 15 new cards, to be mixed with the base game.