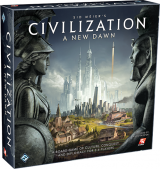 The day of small nations has long passed away. The day of Empires has come.

Rule the world and build an empire to withstand the test of time in Sid Meier’s Civilization: A New Dawn! This new tabletop game based on the groundbreaking video game series lets players become some of history’s greatest leaders as they try to advance their people through the ages, from ancient history to the modern era. Trade, battle, build, and pursue your agendas to become the premier world power!

Designed by James Kniffen, Sid Meier’s Civilization: A New Dawn is a turn-based strategy board game for two to four players. As leaders of competing nations, players must expand their domains, gain new technologies, and build wonders to rise above all others and shape the world to their own vision. By balancing their nation's pursuits, leaders can build a new society greater than any that has come before and guarantee that their people will not only survive, but thrive.