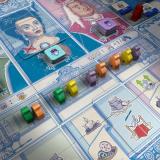 Jest to dodatek do serii Lisboa

The Lisboa: Queen Variant replaces card number 57 when it appears in the game, providing a new twist when playing Lisboa!

D. Mariana Vitória de Bragança (1718–1781)
Once the King was unable to reign, the Queen became the regent.  Mariana Vitória didn’t like the Marquis de Pombal because of the way he handled the Tavora affair, in which a  noble and powerful family that were friends of the Queen were accused of attempted regicide, and thenexecuted in public by the Marquis, without a fair trial, purely to gain political power. In 1777, immediately after the death of the King, she dismissed the Marquis by Royal Decree and exiled him to his hometown, Pombal.