Marvel Champions: The Once and Future Kang Scenario Pack 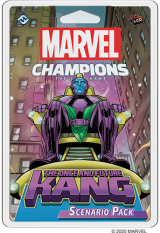 That’s the problem with heroes, really. Their only purpose in life is to thwart others. They make no plans, develop no strategies. They react instead of act. Without villains, heroes would stagnate. Without heroes, villains would be running the world. Heroes have morals. Villains have work ethic.

Prepare yourselves, mortal heroes! You have been tested before by the likes of Green Goblin or the Wrecking Crew, and you’ll soon be able to take on Hydra with The Rise of Red Skull campaign expansion. But you have never faced a villain with the futuristic technology, awe-inspiring intellect, and time-altering powers of Kang the Conqueror!